The published report focuses on the role that culture plays in promoting gender equality and, more importantly, how to achieve gender equality within the cultural and creative sectors. The key challenges of the report are gender stereotypes, sexual harassment, access to the labour market and the gender pay gap, access to resources and access to leadership positions and female entrepreneurship.

The promotion of gender equality and the fight against gender discrimination are twin goals of the EU, including in culture. The report is addressed at all policy makers and people in positions of power, as well as the cultural and creative sectors, the media, and the education sector. The entire report can be found here.

The already available data shows that female artists and cultural professionals across the EU typically have less access to creation and production resources, are paid much less than men and are underrepresented in leadership and other decision-making positions, as well as on the art market. Women are also frequently victims of sexism, gender stereotypes and sexual harassment. More dara and already existing project on gender equality can be found here. 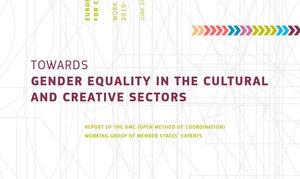