Nordische Filmtage Lübeck (Nordic Film Days Lübeck) is one of the most traditionel film festivals worldwide. It is the only festival in Germany and Europe that is specialized on the presentation of films from the north and the north-east of the continent.

Nordische Filmtage Lübeck is an important meeting point for the film branch from Germany, the north  and the north east of Europe. It takes place in Lübeck, Germany from the 3rd to the 7th November 2021.

Every year at the beginning of November the latest feature films, documentaries and short films from Denmark, Estonia, Finland, Iceland, Latvia, Lithuania, Norway and Sweden are presented in Lübeck (Northern Germany) for five days. There is also an extensive children's and youth film program and a section for Nordic and Baltic series as well as the series Immersive Media / 360 ° or VR films and a retrospective dedicated to important epochs, certain genres or important personalities in film history.

The Filmforum section takes a look at cinematic work in northern Germany (Schleswig-Holstein and Hamburg). In addition, there are seminars, discussions, roundtables and special events such as concerts as well as industry and branch events, the "Lübeck Meetings".

Many of the directors who presented their debut works in Lübeck have meanwhile achieved world fame - such as Bille August, Lasse Hallström, Aki Kaurismäki, Fridrik Thór Fridriksson or Sara Johnsen.

The film festival is organized by the Hanseatic City of Lübeck in cooperation with the film institutes and film foundations of Scandinavia as well as the film institutions of the Baltic countries.

As a platform for North German film, the Filmforum has been taking place regularly since 1988 as part of the Nordic Film Days Lübeck. Fiction, documentary, short and animated films will be presented that are related to Schleswig-Holstein or Hamburg in terms of location, subject, person of the filmmaker or film funding. The Filmforum works with the Hamburg Schleswig-Holstein Film Funding (FFHSH) and is particularly supported by theKiel Film Workshop.

More information about the 63. Nordische Filmtage can be found here. 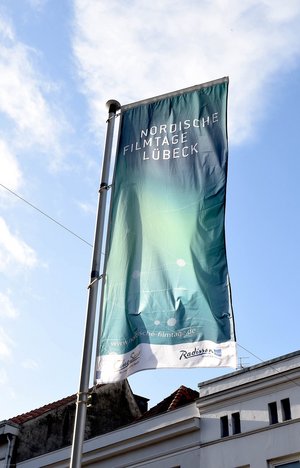