In May, the short film 'Beben' by director Rudolf Fitzgerald Leonard celebrates its world premiere at the Cannes Film Festival. The film about Leon, who has cerebral palsy, was mostly shot in Schleswig-Holstein.

Director and screenwriter Rudolf Fitzgerald Leonard had a serious accident at the age of 14 and had to spend a long time in a wheelchair. He himself says that he was very fascinated by the close relationship between patient and therapist, which developed in a very short time. He addresses this in his short film 'Beben', which has its world premiere this year at the Cannes Film Festival.

The main roles play the physiotherapist Mina (Lilian Mazbouh) and her teenage patient Leon (Luis Brandt),who has cerebral palsy, a disease of the nervous system and muscles. During a therapy session in the therapy pool, an incident occurs that uninvolved people record with their cell phones and post on the internet. The spread of the video on social media has serious consequences for the two main actors. The shortfilm explores inclusion, the relationship between patient and therapist, and the power of social media.

With 'Beben', director Rudolf Fitzgerald Leonard wanted to show how quickly the audience forms an opinion and what the consequences of thoughtlessly distributed videos on the Internet can have. The role of Leon was played by 23-year-old Luis Brandt from Hamburg, who also has infantile cerebral palsy. This is a great progress, as often people with disabilities are played by actors without disabilities. The Film was funded with 12,000 euros by MOIN Filmfund Schleswig-Holstein Hamburg.

You want to know more about inclusion of artists and audiences with disabilities? Check out our Newsletter, that will be sended out tomorrow! 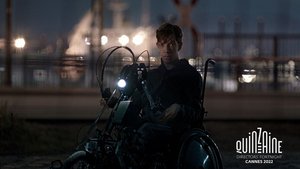