“How can the cultural sector help to tackle climate crisis?” was the leading question of the panel the CULTURE4CLIMATE project held at this years EUSBSR Annual Forum. Marcus Hagemann of the projects Lead Partner Organisation ARS BALTICA moderated the session together with Oleg Koefoed of the Associate Partner Organisations Growing Pathways and Aktionsuniversitetet.

To kick off the session, Marcus Hagemann presented the current status of the CULTURE4CLIMATE project, whose INTERREG Seed Money Phase is running out by the end of September and gave a prospect on the larger platform project which is currently being developed. As a good practice example for the power of narratives and presentations, he referred to Olafur Eliassons Installation “Ice Watch” and quoted the artist’s statement to point towards cross-sectorial approaches in taking action against climate crisis: “Science alone is not enough to compel action. Culture can help to make sense and bring people to action without compelling the actual action.”

The panelists round held a big variety of people both from the arts and culture and the political sector: Olga Zuin and Thorvaldur Kristjansson of Council of the Baltic Sea States (CBSS), the photographer and multidisciplinary artist Oksana Yushko and Jonas Færgeman of the Baltic Sea Youth Platform. As a pivot for their following discussion, Co-Moderator Oleg Koefoed introduced the concept of the Pollination Academy, an initiative for ecosystem-based learning and for a deep rethinking of what it implies to be human-in-nature. “The idea of cross-pollination also goes against martial wording like fighting climate change”, Koefoed stated. The focal point of this approach would be about listening, sensing and creating memory – and cooperating “like butterflies, passing on pollen to one another”, he said. Being asked how they link themselves to this topic, the panelists revealed a wide range of views and approaches. Jonas Færgeman referred to the emotional responses arts can create. “We all know there is a global crisis which also causes fear and anger, especially in people who are hit stronger by its effects than a white man from Scandinavia”, he explained. "Arts and culture should be able to reflect the whole range of emotions connected to climate change. We need to connect cross-cultural to get a better understanding of people with different backgrounds."

Olga Zuin agreed to the growing need of international cooperation: “We are not only acting as individuals, but also as collectives.” In the CBSS Priority Area for Sustainable and Prosperous regions, she works on the understanding that climate change is not an abstract concept but happening locally. Helping people adapt to the situation and meanwhile tackling the subject internationally is the most important challenge in this context, she stated. Her colleague Thorvaldur Kristjansson, who has made a career as a performance artist before becoming Senior Advisor in the Regional Identity Priority Area at CBSS, sees big potential in the role of the artist as a citizen. “We need to move from the sense of I to we and bring more responsibility to the individuals”, he suggested.

Oksana Yushko, who will be Artist in Residence at Atelier Josepha in Ahrenshoop in May 2022, talked about her photographic and journalistic work connecting memory, post-trauma and ecology. To enhance the visibility of climate change, she e.g. changes the context of things given to her by scientists and thus makes art of it: “People who would otherwise not have contact with those things can get in touch with them and develop an understanding of what is going on.”

All panelists agreed on the importance of cross-sectorial and cross-regional cooperation. The individual and collective responsibility was carved out as a cue point as well as holding governments accountable for implementing change. “Hopefully this panel brought us one step further in the context of the CULTURE4CLIMATE project and in taking action against climate change”, Marcus Hagemann said in his closing words. 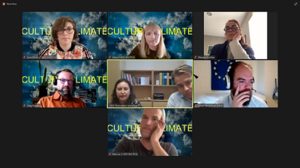