Dwellers from eight Baltic Sea Region countries joined the annual Clean Games Baltic Cup to clean up local areas. More than 20 tons of garbage have been collected by the participants.

This year's games were held in 8 countries. Poland, Latvia, Finland, Denmark, Estonia, Lithuania, Belarus, and Russia competed to win the Cup. The tournament started on the 18 September, the World Clean Up Day, and was closed on 26 September. Competitions were implemented in partnership with environmental organizations Clean Baltic Coalition and Latvian Green Movement.

Participants shared stories of interesting items they had found while playing the game. During the clean-up in Latvia, one of the contestants collected a dead fish in a box – the riddle behind this strange finding is still unsolved. In other places, people managed to find an old stroller, a vanity box and a lost cell phone. These artefacts helped players get their team forward, as they got extra points for these special discoveries.

Players had to face different challenges because of the bad weather conditions. Nevertheless, none of them gave up. In Saint-Petersburg the general council of Norway in Russia joined the game. He pulled a truck tire out of the river Neva, while standing barefoot in the cold water. In Belarus, games were held during a heavy rain. In Latvia, because of the strong wind, organizers had to switch off the generator in case it catches on fire.

On 11 October during a special live stream Clean Gems project announced the winners of this year’s Baltic Cup. The first place went to a team ‘Kartupeļi’ from Valmierā, Latvia. The second and third place went to teams ‘Lemmings’ and ‘X-team’ from Belarus and Russia.

Michael Durkin, executive secretary at Coalition Clean Baltic, had complimented the project on it’s contribution to the environment and had announced that he will mention Clean Games as part of an action plan at next week’s HELCOM ministerial meeting. Jānis Matulis, The Chairman of the Board at Latvian Green Movement also made an appearance and talked about the organisers’ input into the games. Julia Wolman, Project Officer at Nordic Council of Ministers, talked about the importance of international ecological projects and sharing of the best practices.

Clean Games have been conducting international tournaments since 2019 when the first Clean Games Baltic Cup became an annual September tradition. In 2020 seven countries took part in the second Baltic Cup, and in 2021 new records are expected. In 2020 Clean Games also extended the hand of cooperation to the USA, and 20 cities from both countries were cleaned simultaneously during an intercontinental tournament.

Clean Games are team competitions in waste collecting and sorting. During games players use our mobile app - just like Pokemon Go. Since 2014 more than 1500 games have taken place in 24 countries. From 30 to 1500 people take part in one game and collect from 0.5 to 20 tons for an hour. On average a player collects 5-10 times more waste during Clean Games than during traditional cleanups. 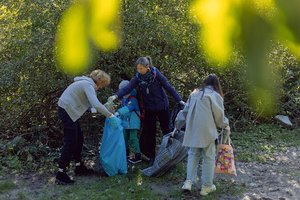