Clean Games Baltic Cup will once again unite participants in a volunteer cleanup competition from 18 to 26 September. This year's competitions are going to be held in Poland, Latvia, Finland, Denmark, Estonia, Lithuania, Sweden, Belarus, Ukraine and Russia.

For three years Baltic countries have gotten together to participate in the Clean Games Baltic Cup which has been held annually on the World Cleanup Day. The difference from an ordinary cleanup is that participants from different Baltic cities compete in waste collecting and sorting and earn game points for the amount of garbage collected.

This august Clean Games representatives took part in the Regeneration Week summit held by Regeneration 2030, which took place in Åland Islands (an autonomous region of Finland). The summit was aimed at building a successful dialogue between youth and older generations (politicians, businessmen) about the environment, climate, and circular economy.

Clean Games hold a cleanup competition there. Alfons Roblom, the Minister of Development, responsible for Environment, Energy, and Housing Issues on Aland Islands played the game as well and was left surprised by the results: “I haven’t imagined that Mariehamn [a city in Aland Islands] has so much litter. It was very surprising to see the total amount of waste that we have collected during the game. So that was a little bit of a wake-up.”

This year's competitions are going to be held in 10 countries: Poland, Latvia, Finland, Denmark, Estonia, Lithuania, Sweden, Belarus, Ukraine, and Russia. The Clean Games Baltic Cup tournaments in Russia are going to be held during the Nordic Weeks festival in Saint-Petersburg. The tournament is implemented in partnership with environmental organizations Clean Baltic Coalition and Latvian Green Movement.

“This tournament became a tradition for us. This will be our third Baltic Clean Cup.” – says the Clean Games chairman Dmitry Ioffe. “We are very glad to see that people from so many places want to participate and even bring their friends and families as their teammates. It is thrilling to see that people actually care about the issue”.

Clean Games, team competitions in waste collecting and sorting, have been conducting international tournaments since 2019 when the first Clean Games Baltic Cup became an annual September tradition. In 2020 seven countries took part in the second Baltic Cup, and in 2021 new records are expected. In 2020 Clean Games also extended the hand of cooperation to the USA, and 20 cities from both countries were cleaned simultaneously during an intercontinental tournament. 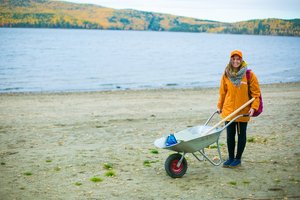