Through the years the museum has welcomed authors and hosted literary events, just as it has made room for music and architecture. Previously, Nordic poetry days were held and in the 1980s Louisiana gave Eastern European dissident authors a place to speak freely. Thus Louisiana Literature upholds a strong tradition. The event keeps the museum engaged in the world of literature, and at the same time the festival emphasizes great literature and its necessity.

World-renowned authors such as Ocean Vuong, Deborah Levy, Bernardine Evaristo and Judith Hermann will participate at the festival. The international authors will be in the company of some of the very best Danish authors of 2022, presenting a broad range of literary genres and expressive forms on stages inside and in Louisiana’s Sculpture Park. Find all participating authors here.

The festival has a long 'afterlife' on Louisiana Channel where many of the authors, who have been guests at Louisiana Literature, are featured. Performances on stage or in-depth talks with Michel Houellebecq, Ben Okri, Zadie Smith, Paul Auster, Margaret Atwood, Patti Smith, Richard Ford, Svetlana Alexievich and many more can be found here. 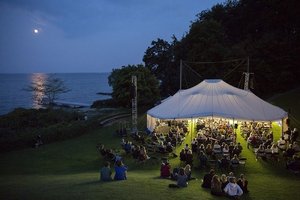