Exercising Modernity Academy is a project for intellectual and artistic exchange, focused on describing the Polish share in modern heritage in a new, interdisciplinary way as well as in an international context.

The project organisers want to reflect on the concepts of East and West, have a closer look at the incoherencies between political, geographical, and cultural borders of Europe in the 20th and 21st centuries. The our goal is to sketch a broader and comprehensive perspective on what Eastern Europe is and how we can better understand the events, changes and processes that have shaped the world in recent times.

The program of the Exercising Modernity Academy 2022, that will take place between 17 and 23 October in Berlin, will be focused on four thematic sections:

(1) Modernity(/-ies) / Modernism(-s) > multilayered relationship between what is modernity understood as a set of practices, forms, ideas and struggles of individuals and societies. (2) Between totalitarianisms > range of issues connected with the experience of two totalitarianisms, which happened to the countries of Central and Eastern Europe. The oppressive systems – both Nazism and Communism. (3) World in motion – defining East and West > ways of defining Central and Eastern Europe and the (in)coherences inherent in these definitions with respect to political, geographical and cultural borders. (4) Deconstruction / Reconstruction > Public space of many cities, towns and villages in Central and Eastern Europe is still marked by numerous sculptural, architectural or urban elements, which are material traces of foreign domination and presence of totalitarian systems in these territories.

The Call is open to researchers specializing in the humanities or cultural heritage, curators, architects, and artists who come from or reside in Israel, Germany or Poland. Selected researchers will get the oppotunity to participat in the Exercising Academy 2022, partial reimbursement of travel costs, accommodation in Berlin. Applications can be submitted until 1 August. More information can be found here.

The Pilecki Institute is simultaneously a research institute, a digital archive, a historical museum and an educational institution established by MPs of all parties serving in the Polish Sejm. It has existed since 2017 in Warsaw, and also has a branch in Berlin, since September 2019. 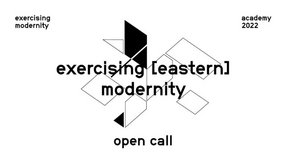