The Nordic Film Days Lübeck is both an audience festival and an important meeting place for the film industry in Germany and Northern Europe. Feature films, documentaries and short films from Denmark, Estonia, Finland, Iceland, Latvia, Lithuania, Norway and Sweden are presented at this five-day event every year at the beginning of November.

The organisers are looking for Nordic and Baltic films (narrative films, documentary films, children- and youth films, drama series and short films) as well as Northern German films related to the regions of Schleswig-Holstein or Hamburg for the Nordic-Baltic programme. Films can be submitted if they were completed after 1 January 2021 and were produced in, or co-produced with Denmark, Estonia, the Faroe Islands, Finland, Greenland, Iceland, Latvia, Lithuania, Norway or Sweden. In consultation with the festival, films may also be considered for submission if they relate in some way to those countries, by virtue of either subject matter, locations, funding or the filmmaker

Films that have been completed since September 2021 can be submitted to the Film Forum (information in German). They must have a connection to Schleswig-Holstein or Hamburg, which can be given by the subject, location, funding or the person of the filmmaker. There is no restriction to specific genres or film lengths. Deadline for all entries is 1 August 2022.

This year's festival will take place between 2 and 6 November.

The Nordic Film Days Lübeck, first presented by the Lübeck Film Club in 1956 and taken over by the Hanseatic City of Lübeck in 1971, has one of the longest traditions of any film festival worldwide. It is the only festival in Germany, and the only one on the European continent, which is entirely devoted to the presentation of films from the North and Northeast of Europe. Many directors whose debut works were presented in Lübeck have gone on to earn fame around the world - such as Bille August, Lasse Hallström, Aki Kaurismäki, Fridrik Thór Fridriksson or Sara Johnsen. 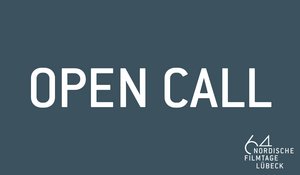