Northern Dimension Partnership on Culture (NDPC) and EU National Institutes for Culture (EUNIC) are looking for collaboration models that connect the CCI field with the digital, economic, environmental, social, education and other sectors, building up a cross-sectoral cooperation ecosystem.

The Open Call aims to create spaces and multilevel partnerships for such collaboration to flourish in Northern Dimension countries and beyond. A further aim is to address challenges which are key to innovation practices that most societies and economies will attempt to address in the coming years: health, climate change, digitalization, economic resilience with involvement of the local communities.

The call is open to organisations (public and private bodies) working in one or more of the Northern Dimension partner countries: Denmark, Estonia, Finland, Germany, Iceland, Latvia, Lithuania, Norway, Poland, Russia, and Sweden. A minimum of three partners from these countries are required, they should include a diversity of stakeholders in the concerned country(ies), including at least one partner representing a non-CCI sector. One of the partners have to administer the application. Project teams are furthermore encouraged to have at least one partner from non-EU countries (i.e., Norway, Iceland, and Russia) in the Northern Dimension region.

Relevant project ideas that are addressing the needs in the sector or region can be submitted until the deadline of 15 February. 5 to 8 innovative ideas will be selected to be further developed into project proposals. Selected project teams will have six months to further define their partnership and proposal. Within the next step 3 to 5 out of the selected ideas will be implemented as pilot projects. Selected teams will have a year to pilot their projects. Per project a total maximum contribution of EUR 60,000 is available.

Regular online Q&A session will be organised about the Call for Ideas during the application process, the first session will take place on 15 December. More information about the Open Call can be found here.

NDPC is a governmental initiative which brings together national authorities and cultural and creative industries (CCI) associations and experts. EUNIC – EU National Institutes for Culture – is the European network of organisations engaging in cultural relations. 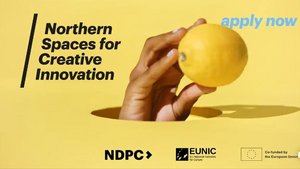