The City of Gothenburg invites artists and artist groups to participate in the international open call for an infrastructure and urban development project in Gothenburg "West Link". Selected artists will get the opportunity create site-specific, permanent works of art in the urban spaces around Haga Station and Korsvägen Station.

West Link is one of the largest infrastructure and urban development projects in Gothenburg’s history. It will establish a new underground railway link beneath central Gothenburg, where three new train stations (the Central Station, Haga Station, and Korsvägen Station) relieve congestion at the old Central Station.

Two artworks by two artsts or artists groups will be created within the project: one for the urban space around Haga Station and one for the urban space around Korsvägen Station. Haga Station lies at the intersection of three Gothenburg neighborhoods of cultural-historical significance, the station will be an entirely new element in this milieu that facilitates better connections among these neighborhoods. The Korsvägen (“Crossroads”) Station is being constructed beneath a transportation hub where public transit, car traffic, cyclists, and pedestrians all converge. It is a pulsing center surrounded by some of Gothenburg’s most prominent landmarks, including the Swedish Exhibition and Congress Centre and Liseberg Amusement Park.

The created artwors are expected to contribute to the design of the public realm and the urban milieu around the stations. They will be funded through the so-called One Percent Rule, which requires that one percent of spending on new construction, renovations, and additions be devoted to public art. Applications should be submitted before the deadline of 20 October. More information about the Open Call can be found here. 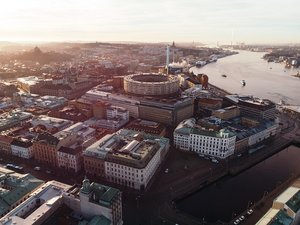